“I believe in music without boundaries. Music should be inclusive, not exclusive. We should use sounds from everywhere to create a universal vibe. People who love music know the best music is created without boundaries and limitations.” 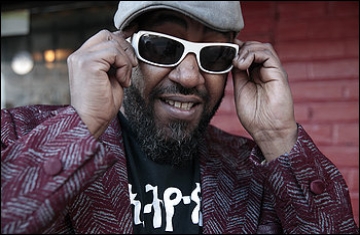 Born and raised in Addis Ababa, Ethiopia, Thomas moved to the USA in 1987 to attend college. While studying, he began playing bass in the DC metro area – firstly with Ethiopian bands, and then forming reggae band ADOLA. ADOLA backed many well known Ethiopian artists, including Aster Aweke and Gigi.

Thomas also worked with Wayna Wondwossen, nominated for a best urban performance Grammy for her song Lovin’ U (Music), and produced tracks on her Moments of Clarity album with friend Abegasu Shiota.

While collaborating on a project with guitarist Eran Tabib in 2006, he heard Gogol Bordello (described by All Music Guide as “one of the most explorative and inexhaustibly creative bands on the planet”) was looking for a bass player familiar with international grooves. Thomas’ knowledge of global rhythms has since become a key part of the band’s ever more expansive sound. He has since recorded three studio albums with the band (Super Taranta, 2007; Trans-Continental Hustle, 2010; Pura Vida Conspiracy, 2013), plus the limited Russian release Моя Цыганиада (2011) and DVD Live From Axis Mundi (2009).

With the encouragement of his Gogol Bordello band mates, Thomas produced his first solo album, The Prester John Sessions, in 2009. An aural travelogue that rages freely through the music and culture of Ethiopia, Prester John was well received by critics: “Another reminder that the country once believed to be the source of the Prester John legend is also one of the musical powerhouses of Africa” (The Guardian); “A love letter to the African state that is always affecting and occasionally magical” (The Skinny).

Thomas discovered the story of Prester John in Graham Hancock’s book The Sign and the Seal:

“Hancock was looking for the Biblical Ark of the Covenant. His quest led him around the world, from the Middle East to Europe and back to Ethiopia. While doing his research, Hancock discovered the legend of Prester John. In the 12th and 13th Centuries, Prester John was an unknown Christian king with massive troops that got the attention of European Kings. Prester John is the character I use to symbolise the man who will bring Ethiopian culture to the rest of the world.”

In 2013, Gogol Bordello released its sixth studio album, Pura Vida Conspiracy, which Q Magazine called “rougher, tougher and altogether more like the raucous joy of their live shows”. The album’s release is backed up by a global tour schedule which continues throughout 2014. Find out when Gogol Bordello are next hitting your town by visiting their tour schedule.

“Music has been my passion for as long as I can remember.  It has guided my approach to life in ways that have enabled me to share valuable experiences with people from all over the world – several experiences of which have opened my eyes to the plight of the underprivileged.  Being a member of Gogol Bordello, a band that stands for human rights, I have had the opportunity to address human rights issues through music.  I believe music is a powerful medium for bringing awareness to the masses, especially young impressionable minds.  When used in a positive way, music can be a powerful tool for social change.  My intention is to build on my experiences by becoming more actively involved in effecting positive change in the lives of the less fortunate.”

Keep up to date with Thomas: